SMA is a specialized U.S. immigration and consular law boutique firm based in St. Petersburg, Florida, managed by Steve Maggi, Esq. a Georgetown University Law Center graduate and former associate at the international law firm of Morgan, Lewis & Bockius. After several years working in international corporate and finance practice, Mr. Maggi decided to start SMA Law Firm, based in Buenos Aires, Argentina, with a specialized focus on U.S. immigration and consular law. Over the course of eight years in the Buenos Aires office, SMA prepared petitions processed at U.S. consulates in South America and around the world, including investor visas, tourist and business visas, while simultaneously handling all employment-based visas and green cards for its U.S.-based clients. The consular practice included the sub-specialty of waivers, which help lift legal bars to entry to the U.S. SMA has represented clients at approximately 50 U.S. embassies. In 2011, Mr. Maggi set up the New York office of SMA, which he currently manages, to maximize SMA’s ability to help individuals and companies worldwide with their version of the American dream. SMA works with franchisees and service-oriented businesses in order to create investment opportunities for foreign nationals to obtain investor visas and EB-5 green cards and assisting foreign companies who want to expand their businesses into the U.S. and send management and specialized personnel to undertake those expansions. As a former immigrant and a naturalized U.S. citizen, Mr. Maggi understands the legal immigration processes on both a personal and professional level and has the experience and know-how to assist clients both in the U.S. and abroad. If you have any questions, please e-mail him at smaggi@smalawyers.com. SMA – “Building the bridge to your American dream” 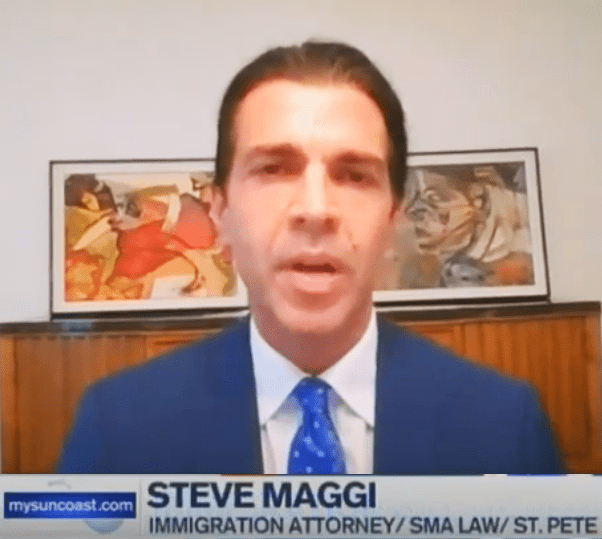 Steve Maggi was born in Bariloche, Argentina, and raised in New York City. A graduate of Stuyvesant High School and the University of North Carolina at Chapel Hill, Mr. Maggi received his Juris Doctor degree from Georgetown University Law Center in 2001 and subsequently worked at law firms in Miami, Florida, where he gained experience in corporate, finance, real estate, and immigration law. However, his passion for immigration law was born in the summer of 1999, while still a student at Georgetown, when he worked at Ayuda, Inc., an immigration clinic in Washington, D.C. Four weeks into his first legal job, Mr. Maggi presented and won a political asylum case for two citizens from Togo. The following summer, as a summer associate at a law firm in Miami, Mr. Maggi gained ample experience in business immigration.

In 2004, Mr. Maggi moved to Buenos Aires, Argentina, and started SMA, with a specialized focus on business and family visas, and preparation of petitions processed at the U.S. consulate, including investor visas, tourist and business visas. At the consular level, Mr. Maggi assisted many clients in removing inadmissibility due to criminal records as well as immigration infractions in the U.S. through a legal instrument called a waiver, enabling them to legally enter the U.S. again. Some of these waivers included extreme hardship waivers which enabled U.S. citizens to be reunited with loved ones who had been deported from the U.S.

In 2011, Mr. Maggi moved permanently to New York City to expand SMA’s reach to matters in immigration court, including removal and deportation matters and legal remedies including cancellation of removal and asylum. He is also working with franchisees and businesses in order to create investment opportunities for foreign nationals to obtain investor visas and green cards, and assisting foreign companies who want to expand their businesses into the U.S. and send management personnel to undertake those expansions. As a former immigrant and a naturalized U.S. citizen, Mr. Maggi understands the legal immigration processes on both a personal and professional level.

We use cookies on our website to give you the most relevant experience by remembering your preferences and repeat visits. By clicking “Accept”, you consent to the use of ALL the cookies.
Cookie settingsACCEPT
Manage consent

This website uses cookies to improve your experience while you navigate through the website. Out of these, the cookies that are categorized as necessary are stored on your browser as they are essential for the working of basic functionalities of the website. We also use third-party cookies that help us analyze and understand how you use this website. These cookies will be stored in your browser only with your consent. You also have the option to opt-out of these cookies. But opting out of some of these cookies may affect your browsing experience.
Necessary Always Enabled
Necessary cookies are absolutely essential for the website to function properly. These cookies ensure basic functionalities and security features of the website, anonymously.
Functional
Functional cookies help to perform certain functionalities like sharing the content of the website on social media platforms, collect feedbacks, and other third-party features.
Performance
Performance cookies are used to understand and analyze the key performance indexes of the website which helps in delivering a better user experience for the visitors.
Analytics
Analytical cookies are used to understand how visitors interact with the website. These cookies help provide information on metrics the number of visitors, bounce rate, traffic source, etc.
Advertisement
Advertisement cookies are used to provide visitors with relevant ads and marketing campaigns. These cookies track visitors across websites and collect information to provide customized ads.
Others
Other uncategorized cookies are those that are being analyzed and have not been classified into a category as yet.
SAVE & ACCEPT
Go to Top